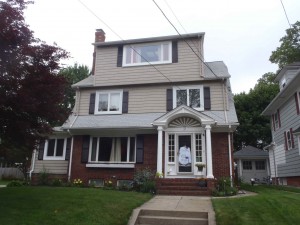 They lived across the street in a modest home to which they added an entire third floor. “A playroom,” the wife added, “some place where the kids could enjoy a train set.” I thought it very extravagant.

But that’s the way they were in recent years. As cross-the-street neighbors, we had a window on their newly-opulent world. There was the time he bought all those stretch limos and parked them all over, until we, the neighbors, complained. One couldn’t run a business out of his home:  our neighborhood was zoned “residential.”

She showed me her beautiful 3-carat turquoise ring one day, as they readied to take the kids on their third visit to Disneyworld.

There was the beach house, a huge, weather-shingled, sprawling Victorian poised atop a high point of beach in East Matunuck, Rhode Island. They bought that, too. A house clearly worth a fortune.

And they were building their dream home, in a tony neighborhood of nearby upscale East Greenwich. A stone tower was its signature architectural trait.

All this on his postal worker’s salary and her 10-hour a week job as psychiatric nurse to a prominent psychiatrist.

She had the audacity one day to say this to me:  “You can do all this, too, if you go back to school and become a psychiatric nurse (she thought me a mere teacher.) The pay is good.”

Yes… well… so is the pay for embezzlement.

That’s what we’d all discover. Their penchant for the good life clouded her husband’s judgment, for he’d been writing big checks to himself, at the Post Office, where he was in charge of accounting.

Despite the fact he’d been doing this for years, his crime was discovered far later, meaning he’d only be held responsible for $1.9 million, instead of the $3.5 million and more they suspected. The rest was irretrievable because of the statute of limitations.

The couple were divorced shortly into its building and she got the new house in the divorce settlement.

But during the divorce hearing, the psychiatric nurse listed on her “essential needs” some extravagant figure for a clothing allotment…a woefully inappropriate amount for her financial situation in life….something like $7,000 a month. Then, too, she claimed a need for $4000 a month for child support.

The judge questioned it.

And the house of cards began to unravel.

(Photo above is of the Catallozzi home, 63 Glen Ave., in Cranston. We were #40, right across the street.) And here’s a link about this true story from the New York Times. The Catallozzi crime figures in the annals as the biggest embezzlement ever, of the United States Postal Service.

From “In the Shadow of Princes,” a chapter of my not-yet-published book of my life….