Walking Back into My Childhood

In preparation for the PBS, “Our Town” focus on West Warwick, to be aired in the fall, West Warwick native and author, Colleen Kelly Mellor, writes of her memories of childhood, growing up in this town, in the 40’s through early 60’s…

To Me, Poles Are ‘Fancy People’ 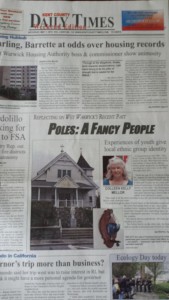 From the age of 4, I lived on Pulaski St., named for that Revolutionary War hero, Count Casimir Pulaski, alongside Polish and French. In my crazy-kid-kind-of-memories, I recall the French family on one side—the Beauregard’s (means “good-looking”) being reserved and quiet and having a parlor that only adults were allowed to enter.

That made it all the more exciting to me, for our Irish/English family had no such reserved room.

I’d peek through the glass French doors at the forbidden realm where the most fascinating item, to me, was a glass weather bottle, hanging from the wall, filled with a liquid that changed color, depending upon the earth’s barometric pressure. As such, it predicted the weather.

My family had no such device. We took our weather as it came.

The Polish family on the other side, the Krauses, had no similar restrictions and invited me often, to eat with them. From them, I learned to love Polish foods, like galombki and pierogi, those little envelopes of savory meat and vegetable/cheese concoctions.

The chewy doughy ones, filled with cabbage, were my favorite.

Walzack’s grocery was a one room mercantile down the street from us, where Mom sent me, often, for items. Once there, an older Walzack woman wearing some kind of babushka wrap around her hair, greeted customers and filled their orders of dry goods and meats.

I’d give her my note on which Mom penned her needs, pay, take the items, thank her, and leave. Few words were exchanged, probably because I couldn’t speak Polish.

Mr.Walzack had the much more intriguing job of smoking the meats in his smokehouse at the back of the lot. We kids never actually saw him do this but knew when he was at it, by the tell-tale smoke curling up the chimney.

Because of him, I learned to love Polish sausages and kielbasa.

I loved the Polish church, too, up the street, in Coventry. Our Lady of Czenstochowa Church had tall spires that rose, gleaming, from its altar in the late afternoon sun.

In the summer, they were one of the many church communities who had their festival which was heavily attended by all who’d go for the food, the arcade games, and the dancing.

From these, I came away with my unwavering belief regarding Polish:

To me, Poles were fancy people who polka-danced, wore colorful costumes, ate the chewy, dough-pockets of pierogi and sausage, and had a waaaay prettier church than mine, even if no one but Poles could pronounce it (Shens-ta-ho-wa) and no one could spell it.

An interesting irony? While I was raised on Pulaski St., in West Warwick, Rhode Island, my “significant other” of twenty-four years grew up in Pulaski County, Arkansas.

Count Casimir Pulaski apparently got around to many different, far-flung locations…probably in the same vein as General Washington who allegedly slept in many beds…

Or maybe just his name did.

West Warwick native, Colleen Kelly Mellor (ckmellor@cox.net), is a motivational speaker and freelance writer whose work has appeared in the Wall St. Journal, Scripps-Howard, and many regional newspapers. She is author to the children’s books Grandpa and the Truck (grandpaandthetruck.com) and is regular commentator in the Providence Journal. She currently completes two books, “The Asheville Experiment” and “In the Shadow of Princes.” Follow her by signing up on this website (subscribe by putting your email address on top right hand side of this page.  It won’t go anywhere else.).