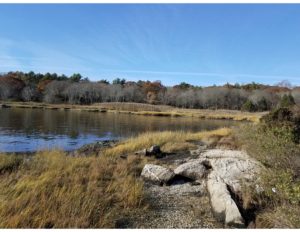 That’s right–Asheville, North Carolina was always on our Bucket List but you know what? The Tar Heel state ended up being our 2nd. most favorite state of all 50. No small accomplishment. North Carolina just couldn’t outpace our  #1 favorite–the smallest state in the U.S….little Rhode island, our home state. So, after living 9 years in Asheville, in the Blue Ridge/Smoky Mountain enclave of artists…writers…nature-lovers, we went home.

Last Sunday was a gorgeous day. With that, Paul and I checked out the Mt. Hope Farm, in Bristol, Rhode Island, where I speak on November 7, at 7:00 PM. My topic? “Downsizing…condo-sizing…Buying/Selling a Home When One is Older” (even out of state buying, as we did, in  that mecca for so many discerning home buyers–Asheville, North Carolina).

My talk is based on my book Boomerrrang and in that vein, I go all about, speaking as to why folks just might want to prepare themselves for a move—anywhere. I also “talk up” Rhode Island and Asheville, North Carolina, in the process, giving folks something to chew on—a different perspective.

But mine’s no stodgy talk…I manage to weave in great fun. For instance, in this talk, I’ll mention the folks I just met on Sunday’s walk.I even mention that vicious little dog (why are they always little?) owned by the first woman– a dog that repeatedly tried to savage my ankle.

When we checked out my speaking site, we walked the grounds. There was an event going on in the barn… a wine-tasting. Following the parking guide’s directions, I went back out to the gate on the main road and drove down the road to the parking area. When I passed a great green expanse, I recalled that I’d been there before—about 50 years ago for a polo match (yep–I’m getting up there, age-wise.) Why did I remember it? The event was wildly impressive: white linen tablecloths atop tables, aside the playing field…fresh flowers in cut glass vases…expensive wines and glass goblets, along with picnic goodies in baskets that people brought.

Those in attendance were dressed in finery, too, with the women wearing picture hats with broad brims, a la Kentucky Derby (you know, the horse race that evokes mint juleps in frosted metal cups). All so elegant. Then we watched the match where men hit a very tiny ball, while galloping atop giant steeds. All very Brit and very posh.

While walking the paths, we met two couples… both interesting. The woman of the first set lives in Bristol and readily admits: “I never go beyond this immediate area.” She simply would never have an occasion to go to where we live—East Greenwich/Cowesett area.She admitted that, laughing at her travel-challenged lifestyle. In fact, she was impressed we go all over. She was, I’m guessing, in her 40’s.

The second set—a couple in their 80’s (yes, I asked) we got to know quite well, for we spent a good forty-five minutes chatting with them. They were sitting on the steps of the log house which turned out to be our ultimate destination on the grounds. He (Ree-chard is Richard with a French accent) met Claudine when he was stationed in World War II, in France. She became his war bride (remember, the French regarded Americans as heroes and saviors from occupation by Nazi Germany). They’ve been married 60 years. They’ve lived in Florida but now they are back in Rhode Island as full time residents. They’re just two more Boomerrrang-ers (btw, I’m forming an actual group of such, because as I speak, more and more folks are coming up to me, saying: “We’re Boomerrrangers, too…We lived in Florida for 8 years but that was enough. So, we came back to Rhode Island.)” Therefore, I’m forming a club, so please add your name to the subscription list on this site, if you, too, want to be a member.

Ree-chard is a sailing aficionado…They’re not golfers. That’s important to note. I told them that we’re neither. That was a crucial determinant for how we chose where we wanted to live, in retirement, for we saw no reason to pay the extra fees that go with joining a boating or golfing condominium community. Plus, we didn’t want our conversation always rotating around subjects about which we know little.

So, a glorious fall day. The temperature climbed to almost 60 degrees. We had a lovely walk along the Bay. Another couple told us a seal was sunning himself on one of the rocks, but he’d disappeared before we could see. That’s not unnatural: Nearby Chatham, Massachusetts has been a mecca for seals in recent years, hence the Great White shark increase, too, for seal is the favorite diet of sharks.

Today, we met 4 friends. Another thing I noted? No one leaves Bristol…and if they do, it’s not for long. When the second couple asked where we lived, I told them Cowesett. The man seemed puzzled, so I said, “It’s up from Main St., East Greenwich…the harbor.” He then offered: “Oh, we never go to that far..”

I thought: “Here we are, in beautiful Bristol, a historic enclave in little Rhode Island, with folks who’ve been to France (one was raised there—the other was military-sent) but they admittedly never travel to our section of the state. Then again, we’d heard the same from the other couple….

And that means most definitely her people.

***Join Colleen at one of her speaking engagements (call Mt. Hope Farm if interested for this Wed’s talk) where she gives all a truly different perspective on Rhode Island and tells you how to succeed whether you’re downsizing, condo-sizing, moving to a different region (in or out of state). Her “rules for success” work anywhere…for anyone. Her book, “Boomerrrang, is available at Barrington Books in Barrington and Cranston’s Garden City; the Savoy in Westerly; Malaprops in Asheville, NC, and on Amazon and Kindle. If you buy through her website (colleenkellymellor.com), she will personalize and autograph the book per your instructions.

PS. If you’ve never been to Mt. Hope Farm in Bristol, RI, check it out…Walk the grounds. Bring your kids and dogs (we were the only ones without a furry critter.)

P.P.S. Thanks, again, to Colleen’s recent audience at Tavern Preservation Society in Kingston. She loves the fact they’ve now made her an honorary member of their interesting group. Colleen was so impressed she recommended they get author Ed Iannuccilli as speaker, for one of their future events. Ed, in turn, recommended Colleen to Mt. Hope Farm—Bristol, where he’d spoken.